Well, it happened again! Another update to the Rule Book!

Here’s hoping that this is the time we can rest.

The biggest change with the release of the 1971 card set and the 1.7 Rule Book has to do with something called “Batter Advantage” and “Pitcher Advantage”.

This also overhauls the old Pitching Fatigued rules which, honestly, I found a little complicated.

I think this will simplify things quite a bit.

What led to this?

This is something I’ve resisted because it really goes against the core concept of the game design, which was to keep things simpler.

I’ve told the story before, but one of my earlier iterations of the game had split fielder ratings – a letter for their range and a number for how well they avoided errors – and play-testing it with a target demographic just showed me that, by and large, folks really didn’t care for it.

I’ve really tried to toe the line here with keeping the game accurate and playable which does sometimes mean not making things quite as granular as it could be.

By example, could the stats be made more accurate by requiring four 10-sided dice instead of just three? Of course.

Then again, five 10-sided dice would be even better than that!

At some point, enough’s enough.

So while I haven’t been keen on adding splits to the cards, what I was willing to do was fulfill another request I had from several end-users – add L/R/S indications on the batter card to show what side they bat or throw from.

Even that I was a little shy about because I want to keep the card design clean and this is just one other piece of data on there that can clutter things up a bit, but…  okay, I’ll give in on this one.

Seeing that on the cards, however, made a little light bulb switch on inside my head.

What if we used some readily-available data to figure out whether some pitchers were likely used to just face certain-handed batters and make some note of that on the card?

And what if we could do something similar with batters, being able to guess that they’re likely used as pinch-hitters against certain-handed pitchers or maybe the numbers indicate they’re likely pulled late from games once a reliever enters a game who throws from a different side as the starter did?

Now you can use those LOOGYs the way they were intended to be used.

These ratings don’t appear on too many cards, and mainly just on newer season sets, so they won’t skew things too drastically, but it’s enough of a factor to make a difference and add an extra layer of strategy to the game.

So how does this all work?

A Batter Advantage exists for a plate appearance if any of the following situations exist:

When a Batter Advantage exists, any roll off of the pitcher’s card may be switched over to the batter’s card. Simply take the roll and subtract 50 from it.

The Offensive Manager may choose to use either the original roll or the modified roll.

In addition, all fielders lost 1 point from their fielding ratings, demonstrating balls in play are hit harder.

A Pitcher Advantage exists for a plate appearance if any of the following situations exist:

When a Pitcher Advantage exists, any roll off of the batter’s card may be switched over to the pitcher’s card. Simply take the roll and add 50 to it.

The Defensive Manager may choose to use either the original roll or the modified roll.

In addition, all fielders subtract 1 point from their fielding ratings, demonstrating batters get weaker contact on balls in play.

A little strategic wrinkle you may want to incorporate into your games.

Now maybe you have that batter available on your roster who hit .350 in 20 games but only had 30 plate appearances. But he’s an R- batter. You’re no longer necessarily going to start him against right-handed starting pitchers.

And your Jesse Orosco-types are more set up to annihilate left-handed batters and force the opposition’s hand towards bringing in a right-handed pinch-hitter.

Let’s look at a couple of examples from the 2017 season.

Los Angeles (N) had Chase Utley, who has an L- rating on his card.

Let’s say you go ahead and start him against Houston’s Dallas Keuchel, who throws left-handed.

You’ve just watched his OBP fall by at least 50 points, which is big enough that you’re going to think twice before starting Utley against Keuchel.

In another example of Pitcher Advantage, Houston’s Josh Reddick is at bat with men on base in the 7th inning of a close game.

Los Angeles (N) has Yu Darvish on the mound.

Los Angeles (N) decides to bring in Luis Avilan to face Reddick, because the pitcher has a L+ rating and Reddick is a LHB. 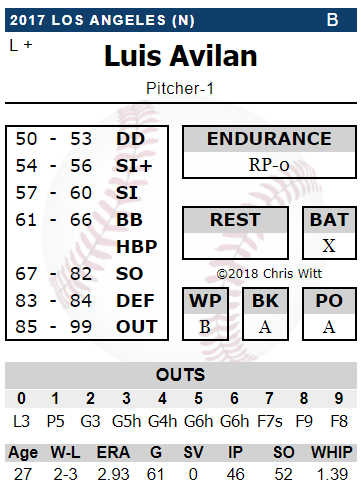 The Defensive Manager really has to think this through, however, and see if gaining just a 10-point advantage in OBP is worth it.

And does Houston’s manager bother with a pinch-hitter here? A 10-point drop isn’t so huge.

Let’s say it’s the same scenario as above, but Darvish has just become Fatigued, so Batter Advantage is in effect.

A 90-point boost to Reddick’s OBP is a big swing.

Were Darvish facing a lesser hitter, there may be a smaller penalty, but facing a quality card like Reddick’s could really bite him. The Defensive Manager surely would have to get Darvish out of there if he were fatigued.

Some fun stuff that I think makes the game a bit more interesting, incorporating lefty/righty match-ups without getting too bogged down in split numbers or cluttering up the cards.