It’s time for a play-test of the latest release.

Teams were randomly selected, getting us two teams that did well, but ultimately came up short.

In an attempt to replay the famous “called shot” of Babe Ruth in the previous season’s championship series, we’ll be using Charlie Root (15-10, 2.60) as the starter for Chicago.

Lineups are stock and we’ll be ignoring any injuries.

Not surprising, New York’s got some “ink” on their cards. You may recognize a couple of these guys. 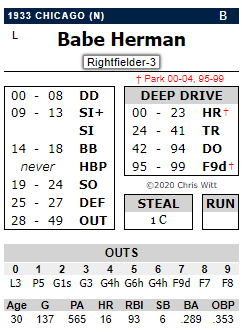 Top of 1st
Woody English rolls up a 29 with a 4 modifier die. That’s an OUT, specifically a G4s and he’s out on a slow roller to Tony Lazzeri at second base.
Billy Herman rolls an 18 – a strikeout.
Babe Herman rolls a 51, which is usually trouble for the pitcher. Sure enough, that’s a Deep Drive off of Gomez’s card. We’ll roll again on Babe Herman’s Deep Drive section and we get a 76 – a two-out double.
Now Riggs Stephenson with a man in scoring position. He hit .329 in 1933. He rolls an 82, though, and the 5 mod die results in a G6 – a grounder to Frankie Crosetti at shortstop, who goes across the diamond to Gehrig at first.
No score

Bottom of 1st
Earle Combs leads off with a 38 (OUT) and 1 mod die (P5) – a pop out to third.
Now Joe Sewell rolls a 78 (OUT) with a 2 mod die (G1) – he grounds out to the pitcher, Root.
38-year old Babe Ruth up now, rolling an 18 to draw a walk.
Playing with the automatic base stealing rules, we see that the mod die shows 1, and Ruth is a 1C stealer, so normally we’d check the chart to see if he steals here. However, the Chicago battery has a -1 effect, so Ruth is actually a 0C. He’s not going here.
The Iron Horse up now, and Gehrig’s 88 with a 5 mod die means a hard grounder to second. We’ll pretend that Billy Herman takes it himself and steps on second, retiring Ruth.
No score

Top of 2nd
Frank Demaree rolls a 59 for a leadoff single off of Gomez’s card and Chicago is in business.
Charlie Grimm rolls a 23 (OUT) with an 8 mod die (F7), flying out to left.
Gabby Hartnett rolls a 68, resulting in Lefty’s second strikeout of the day.
Now Billy Jurges rolls a 44 (OUT) with a 0 mod die (L6), lining out to Crosetti to end the Chicago half of the frame.
No score

Bottom of 2nd
Chapman pops out to English at third and Lazzeri is out on a hard grounder to second.
Bill Dickey, however, rolls an 03 – good for a Deep Drive. The follow-up roll is a 30. Dickey’s HR range is from 00-28, so he just misses. It’s off the wall in the right-field corner and Dickey is all the way around to 3rd with a triple!
Root goes ahead and faces the #8 hitter, Crosetti, and gets a 44 with a 4 mod die. That’s a rare play. We’re going to ignore any possible injuries for this contest, so we’ll go straight to the odd play booklet. We’ll re-roll and we get a 96 with a 1 mod – that’s a P5 off of Root’s card. We’ll re-roll the percentile dice and check the P5 in the Odd Play Booklet. It’s a 31. And…
New York catches a break! English loses the ball in the sun and it drops in for a single, scoring Dickey from 3rd!
Gomez singles Crosetti to third, but Combs grounds out to Root, ending the inning.
But not before the sun gifts New York a run!
New York (A) leads, 1-0

We’ll call out highlights from this point forward…

Top of 3rd
Gomez strikes out Root to start the frame, but then runs into trouble.
English singles, Billy Herman walks, and with two out Stephenson doubles both men in to give Chicago the lead.
Next up – Demaree triples!
Chicago (N) leads, 3-1

Top of 4th
Gomez works around a leadoff walk to Hartnett and is solid from then on.
He has 4 strikeouts after 4 innings of work.
Chicago (N) leads, 3-1

Top of 5th
Lefty wriggles out of a jam.
Babe Herman doubles with one out, Stephenson walks, and Demaree walks to load the bases after Dickey is unable to hold on to a foul tip. (That came from an Odd Play on a strikeout, ultimately becoming a walk!)
But Grimm grounds back to Gomez, who comes home for a force out, and then he strikes out Hartnett for the second time, getting out of a bases-loaded situation!
Chicago (N) leads, 3-1

Bottom of 5th
Ruth walks again, but other than that there’s little action.
One interesting roll comes with Sewell at bat, who rolls a 69 with a 8 modifier die. That’s normally a strikeout off of Root’s card, but Sewell has a “rare 1” (!) reading in his SO range. So that turns into a F7 instead of a strikeout.
“Rare 1?!”, I thought.
Ya… Sewell struck out four times in 606 plate appearances!
In fact, he struck out in 1.4% of his 8,333 career plate appearances.
That is crazy…
Chicago (N) leads, 3-1

Top of 6th
Gomez goes through Chicago in order, including a third strikeout of opposing pitcher, Root.
Chicago (N) leads, 3-1

Bottom of 6th
A brilliant leaping grab by shortstop Billy Jurges robs Chapman of a potential leadoff hit.
Lazzeri singles, but Root strikes out Dickey and retires Crosetti on a fly to right.
Chicago (N) leads, 3-1

Top of 7th
Babe Herman collects his third double of the day, but Gomez gets a pair of fly outs to center and strikes out Demaree – 7 punchouts in as many innings of work.
Chicago (N) leads, 3-1

Bottom of 7th
Gomez leads off and goes ahead and bats, staying in the game with 11 of his 13 Endurance points used up thus far. He strikes out and Root gets Combs and Sewell with Ruth (3 BB) due to leadoff the 8th.
Chicago (N) leads, 3-1

Top of 8th
Some regret over leaving Lefty in for New York, as Chicago starts off with a Grimm single, Hartnett walk, and Jurges single, loading the bases for pitcher Charlie Root.
We stick with Lefty, though, bringing the infield in as Root attempts a squeeze play.
The roll is 60, which is a BB on Gomez’s card, but the bunt chart says to change that to a ball. Chicago could have walked in a run there, but no. We’ll try again…
This time it’s a 23, which is a SO. That’s “2 strikes” on the bunt chart, so it’s a 1-2 count!
We’ll swing away now.
The roll is a 69, and Root has struck out for the fourth time.
Now to the top of the order, where English has just 1 hard grounder on his card and Gomez has none, so we’ll play the infield in again.
The roll is an 83 (OUT) with a 9 mod die (F8). The “Runner Chart – Fly Outs” shows that an average runner scores from 3rd on an F8, so Grimm scrambles in to make it 4-1, Chicago.
Billy Herman walks to load the bases again, and with Babe Herman (3-for-4, 3 2B) owning Gomez today, we’ll head to the New York bullpen.
We’ll turn to #6 starter, Charlie Devens (4.35 ERA, 14 G), as the guys who are primarily relievers were all over 5.00 ERA in 1933.
Babe Herman lifts a fly ball to left and it goes off Chapman’s glove for a 2-base error and Chicago has opened up a huge lead.
Chicago (N) leads, 6-1

Bottom of 8th
Don’t count New York out of this one, though.
Ruth leads with a single, Gehrig walks, and both runners score on a triple by Lazzeri.
Lazzeri then scores with the infield back on a ground out to short and they get all 3 runs back.
Chicago (N) leads, 6-4

Top of 9th
Devens walks Hartnett with one out, but then gets one of his many hard ground-outs off his card to get Jurges on a 6-4-3 DP.
We head to the bottom of the 9th with the home team down by 2.
Chicago (N) leads, 6-4

Bottom of 9th
No good defensive subs for Chicago, so we’ll stick with them as is.
And Root has used up 12 of his 14 Endurance points, so he stays in for the complete game.
First up is the pitcher’s spot, and New York will pinch-hit with Doc Farrell (.376 OBP) to try and kick-start things.
He rolls an 18, which – sure enough – is good for a walk.
To the top of the order, Chapman rolls a 77 (OUT) with a 3 mod die (G5s) and it’s a soft ground out to English that moves Farrell up to 2nd.
Now Sewell rolls an 06 and it’s a single that puts men at the corners with one out.
Chicago hoping for a double play. New York with Ruth and Gehrig due up and the tying run on base…
Ruth…  It’s an 07. Just outside his Deep Drive range (00-06), but a SI+ nonetheless.
With one out, Sewell (an average runner) could attempt to make it to 3rd, but they’ll hold him up with Gehrig due up.
New York now trails by 1.
Gehrig rolls an 11 – another SI+. This time, they’ll gamble on tying it up here.
A fresh roll on the “Choice Chart” is an 80 with a mod die of 2 and Sewell is thrown out at the plate by the center fielder, Demaree.
Wow…
Chapman up and he rolls a 97 (OUT) with a 6 mod die (G6h) and Jurges takes it, taps second base for the force out and the game is over.
New York can take some consolation in knowing that even if they had held Sewell, the game would have ended on a 6-4-3 DP anyhow.

Charlie Root goes the distance, allowing 5 runs on 9 hits and 6 walks, striking out 2.

Babe Herman goes 3-for-5 with 3 doubles.

Babe Ruth reaches base in all 5 plate appearances (2 singles, 3 walks).