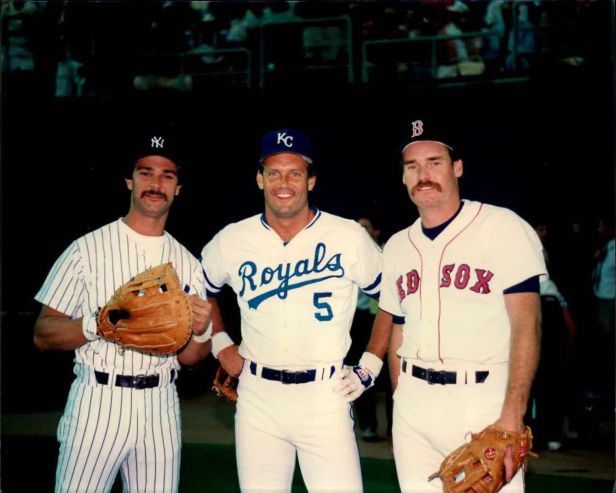 You can purchase the 1985 season in PDF format today at the Sellfy store.

1985 was a special season for me – perhaps the first that I was officially nuts about baseball from Opening Day thru the final out of the World Series.

So this card set has some special significance for me and I’m really looking forward to it.

There were great divisional races in the American League, where Kansas City held off California by just 1 game in the West and Toronto won the East by 2 games over New York.

In the postseason, Kansas City needed the full 7 games to defeat Toronto and another 7 to beat St. Louis in the all-Missouri championship series.

The National League races were also tight, two-team races. St. Louis finished 3 up on New York in the East and Los Angeles was 5.5 up over Cincinnati.

One other note of particular interest is the number of star players who debuted after the trade deadline in 1985, including Devon White, Jose Canseco, Paul O’Neill, and Andres Galarraga.

Let’s dive in to some highlights!

Atlanta (66-96)
Batting:  Dale Murphy and Bob Horner each has 7 Deep Drives.
Pitching:  Rick Mahler is one of six starters with a -2 Hold. Pascual Perez allows 7 Deep Drives and 22 on-base chances.
Defense:  Check out the right side of the infield with Glenn Hubbard (2B-5) and Bob Horner (1B-5). In the outfield, however, both CF Murphy and RF Claudell Washington have a 1.

California (90-72)
Batting:  Reggie Jackson has a set-high 19 strikeout readings. Gary Pettis also has a high strikeout total (18) but is also tied with an AL-best 5A steal rating.
Pitching:  Closer Donnie Moore allows just 1 Deep Drive and 10 on-base chances.
Defense:  There’s only one regular catcher who has a -1 Throw and it’s Bob Boone. In addition, Bobby Grich is a 2B-5. He’ll usually DH, but Reggie is a RF-1.

Chicago (A) (85-77)
Batting:  Greg Walker has 7 Deep Drives. Ron Kittle goes deep 65 times and Carlton Fisk 58 times on Deep Drives. Rudy Law is a 4A base-stealer.
Pitching:  Closer Bob James allows just 1 Deep Drive and 9 on-base chances. Floyd Bannister has 15 strikeout readings.
Defense:  AL Rookie of the Year Ozzie Guillen is a SS-5. Law is a LF-5. On the down side, 3B Tim Hulett is a 1.

Los Angeles (95-67)
Batting:  Pedro Guerrero has 7 Deep Drives and, along with Mike Scioscia, has an NL-best 25 on-base chances. Marshall has 7 Deep Drives plus an NL-high 18 strikeout readings. Mariano Duncan is a 4A base-stealer.
Pitching:  Orel Hershisher and Fernando Valenzuela each has just one Deep Drive allowed, the former also allowing just 10 on-base chances. Closer Tom Niedenfuer has 18 strikeout readings.
Defense:  Yep. 2B Steve Sax got a 1. CF Ken Landreaux also got the dreaded uno.

Milwaukee (71-90)
Batting:  Cecil Cooper has 7 Deep Drives.
Pitching:  Jamie Cocanower has just one Deep Drive allowed. Moose Haas is one of six starters with a -2 Hold.
Defense:  1B Cooper and LF Robin Yount each have a 1.

New York (A) (97-64)
Batting:  Don Mattingly has an AL-best 9 Deep Drives and Dave Winfield has 7. Rickey Henderson has 28 on-base chances and is tied for an AL-best 5A base-stealer.
Pitching:  Closer Brian Fisher allows a rare 8 on Deep Drives. Joe Niekro is one of four pitchers with a +3 Hold.

New York (N) (98-64)
Batting:  Darryl Strawberry has 7 Deep Drives. Gary Carter goes deep an NL-best 61 times on Deep Drives.
Pitching:  Dwight Gooden has just one Deep Drive allowed and only 9 on-base chances. Strikeouts galore with set-best 19 by Sid Fernandez plus 18 by Gooden. Ed Lynch is one of six starters with a -2 Hold.
Defense:  Keith Hernandez is a 1B-5.

Philadelphia (75-87)
Batting:  Mike Schmidt has 8 Deep Drives and Glenn Wilson has 7. Juan Samuel is a 5B base-stealer.
Defense:  There’s only one regular catcher who has a +1 Throw and it’s Ozzie Virgil. Also bad is Rick Schu with a 3B-1.

St. Louis (101-61)
Batting:  Willie McGee has 7 Deep Drives and 24 on-base chances. Andy Van Slyke and Jack Clark also each have 7 Deep Drives. Rookie of the Year Vince Coleman is a burner on the bases, with an 8A steal rating! McGee and Van Slyke are also 4A stealers.
Pitching:  John Tudor has just one Deep Drive allowed and a set-best 8 on-base chances.
Defense:  Yes, of course Ozzie Smith is a SS-5. On the flip side, Clark is a 1B-1.